LOS ANGELES (AP) — The third and most powerful in a

LOS ANGELES (AP) — The tail end of a punishing winter storm system lashed California with thunderstorms, hail and severe winds Monday after breaking rainfall records, washing out roads and whipping up enormous waves. At least four people died, three were missing and several others were rescued from raging floodwaters during three storms in four days.

Rescuers were set to resume a search for an 18-year-old woman whose car plunged into a rushing creek after a collision southeast of San Francisco. Alameda County Sheriff's spokesman Sgt. Ray Kelly said recovery efforts were hampered Sunday by dangerous conditions.

Heavy snow in the Sierra Nevada mountains triggered an avalanche that shut down a highway just west of Lake Tahoe. Officials warned of continuing avalanche danger at all elevations of the Sierra. In northern Nevada, schools were canceled after more than a half-foot of snow fell near Reno.

A thunderstorm brought ashore pounding hail northwest of Los Angeles in Santa Barbara County, where a tornado warning was briefly issued. No tornadoes were reported but wind gusts topped 60 mph.

Flood watches and warnings remained in place for much of Southern California, a day after nearly 4 inches of rain fell south of Los Angeles, inundating roadways, toppling trees and raising concerns about damaging mudslides.

Nervous residents moved their cars to higher ground at a mobile home community in Orange County's Seal Beach south of Los Angeles after heavy rains filled a parking lot to the height of a fire hydrant.

"If it got up any higher, I'd start to get nervous," said John Nelson, a 60-year old contractor. "It was really deep."

One neighbor grabbed a paddleboard and paddled through the lot. Long Beach residents floated on rafts through flooded streets and a helmeted man raced a jet ski through suburban Fullerton.

Commuters faced a messy drive to work, with rainfall expected to ease but not end until Tuesday.

Motorists were urged to use caution on mountain passes where heavy snow was falling.

The National Weather Service had warned that the system could be among the strongest storms in years, and it delivered. 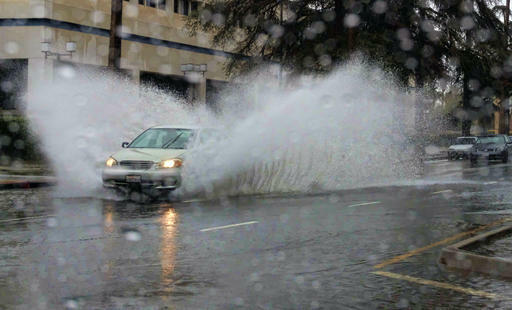 A car drives through a flooded street in the Van Nuys section of Los Angeles on Sunday, Jan. 22, 2017. California residents evacuated neighborhoods below hillsides scarred by wildfires as the third, and largest, in the latest series of storms brought powerful rain Sunday and warnings about flash flooding and mudslides. (AP Photo/Richard Vogel)

California has been swamped during a wet winter that has brought plenty of rain and snow after years of drought.

A man's body was found in a rain-swollen creek in rural northern San Diego County, which received more than 2.5 inches of rain. The water was moving so swiftly that crews were not immediately able to pull the victim to shore, according to the Union-Tribune newspaper.

Along coastal San Diego, two women were swept into the ocean by a large wave Saturday in Sunset Cliffs. Both were pulled from the water, but one of the women later died at a hospital, Fire-Rescue Capt. Joe Amador said.

A motorist in the Los Angeles County city of Pomona died after losing control and smashing into a telephone pole amid heavy rains, according to police.

Firefighters in San Bernardino County east of Los Angeles staged a dramatic swift-water rescue of a couple whose pickup truck was trapped in surging water west of the Cajon Pass.

Television footage showed rescue crews sending a raft, which was anchored to a firetruck, into rushing brown water so the trapped couple could climb aboard, one by one, from the car's passenger window.

It was one of several similar rescues across the state, leading authorities to warn drivers to avoid roads with even minimal flooding.

Traffic was diverted off interstates 110 and 710 south of downtown Los Angeles because of water flowing across lanes. Many motorists were forced to abandon their submerged cars.

Hundreds of homes were evacuated near wildfire burn areas in Santa Barbara, Los Angeles and Orange counties, but some orders were lifted Monday.

In Mendocino County, a massive oak toppled onto an apartment in the city of Ukiah Saturday, crushing the building and killing a woman in her bed, fire officials told the Press Democrat newspaper of Santa Rosa. The woman's boyfriend and a 3-year-old boy escaped.

The San Francisco Bay Area was under a high surf advisory along the coast until early Tuesday with waves of up to 19 feet expected, National Weather Service meteorologist Steve Anderson said.

A historic WWI-era ship called the S.S. Palo Alto beached near Santa Cruz was torn apart by massive waves Saturday. It had been a landmark since it was intentionally grounded and connected to shore with a pier in 1930 in a failed venture to create a seaside entertainment destination.

Avalanche warnings were issued for northern Utah, where heavy snow snarled traffic and led to numerous fender benders. No serious injuries were reported. Forecasters predicted up to a foot of snow and winds gusting to near 50 mph.

(Copyright 2017 The Associated Press. All rights reserved. This material may not be published, broadcast, rewritten or redistributed.)